The church of St Anne Limehouse is an outstanding masterpiece of English Baroque architecture, listed as Grade 1, the highest level of heritage importance.  It was one of 12 churches built in the reign of Queen Anne to serve new parishes in the fast-growing suburbs of London. The work was funded from a tax on coal imported to the city under the Fifty New Churches act of 1711.

The architect was Nicholas Hawksmoor (1661-1736) who had worked as Sir Christopher Wren’s assistant since 1684 in the rebuilding of St Paul’s Cathedral  and  more than fifty parish churches destroyed in London’s Great Fire of 1666, as well as  at Chelsea and Greenwich’s Royal Naval College. St Anne’s was his first solo design. He laid its foundations in 1712, built the mighty tower in 1718-9 and completed the interior in 1725.

The church displays several typical apects of Hawksmoor’s Baroque style – its monumental size, the contrasts of light and shade, the oversized classical elements and the eclectic creativity of its tower. The early eighteenth century was a time of intense interest in early church history and several aspects of the design reflect his awareness of Roman and Byzantine precedents, for example the church’s detached position within a sacred enclosure, its generous allocation of space to porches, narthex and preparatory rooms at the west end and its two vestries at the east. The church’s unusually precise orientation (only 1° from true East) probably reflects the influence of the scientist Edmund Halley, who was a member of the commissioning body at exactly the same time as he was developing a declination-corrected magnetic compass. Characteristically the architect made several design revisions during the construction of St Anne’s, and the mysterious pyramid in the churchyard may be a by-product of his earlier proposal for the towers at the east end.

Hawksmoor’s churches were unlike anything that came before or after. In the words of Sir John Summerson they challenge us ‘not only by their departure from Wren’s classic models but by a sense of power, of the sheer grandeur of hewn masonry, of primitive form brought into the service of religion’. 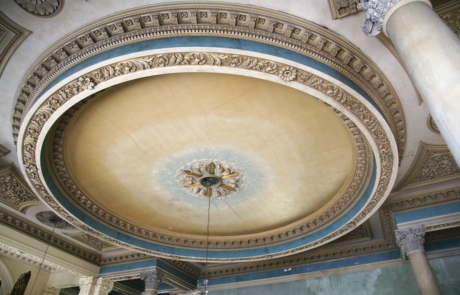 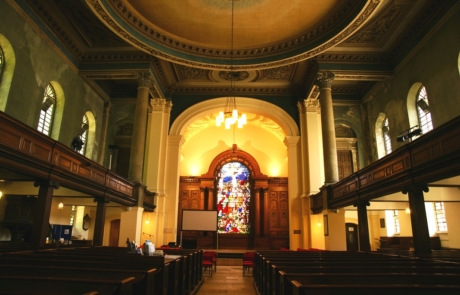 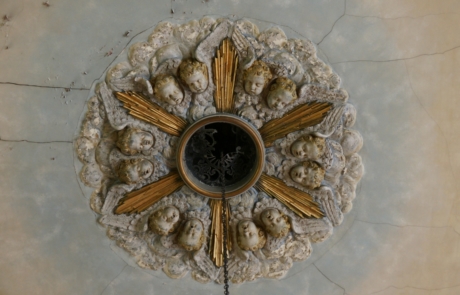 Attitudes to Hawksmoor’s powerful architecture were put to the test in the high Victorian era. On Good Friday 1850 St Anne’s was gutted by fire. Remarkably a churchwarden named Joseph Adams had taken out an insurance policy only three months previously, and the Rector and parish council had no hesitation in restoring what had been lost. Their architect, Philip Charles Hardwick, was one of the leading Victorian classicists, as demonstrated by the work he did with his father in the making of Euston station. Behind the scenes he reinstated the burnt-out roof using the same modern structure as Euston’s Great Hall, but the visible plasterwork of the ceiling was a restoration of Hawksmoor’s original.  Joinery destroyed in the fire was carefully replaced . Its detailing is excellent and breathes the spirit as well as the appearance of eighteenth century woodwork. A new oak pulpit was designed in 1856 by Hardwick’s then pupil Sir Arthur Blomfield (1829-1899). Untypically for the time, Blomfield’s distinguished career was characterised by a high degree of respect for preservation of historic fabric. Perhaps he learned those values at St Anne’s.

With St Anne’s original organ  – by Richard Bridge of Holborn (1741) – lost in the fire, the churchwardens were looking for a replacement just at the moment when the display instruments from the Great Exhibition of 1851 were being dismantled for the relocation of the Crystal Palace from Hyde Park to Sydenham. Messrs Gray and Davison’s Grand Organ had been awarded a gold medal by a jury that included the composer Hector Berlioz: magnificently powerful and thrilling in tone, it was perfectly suited to the achitectectural setting of St Anne’s.

Nicholas Hawksmoor’s powerful style was disregarded for many years. It fitted awkwardly between between the classicism of Sir Christopher Wren and Georgian Palladianism. A monumental tome on London Churches 1630-1730 published in 1896 could only say of St Anne’s Limehouse that it betrays Hawkmoor’s peculiarities. Maintenance was neglected during the first half of the 20C, and though the church survived the WW2 blitz unscathed, a declining parish roll and rising repair bills caused the diocese to consider demolition of both St Anne’s and Christ Church Spitalfields in 1960.

But by this time Hawksmoor’s reputation had sharply revived. Elizabeth and Wayland Young spearheaded the revival in their book Old London Churches of 1956, launching a formidable campaign to restore Hawksmoor’s reputation and save these threatened masterpieces of English baroque architecture. The poet John Betjeman took the chair, members included T.S.Eliot, the singer Bud Flanagan, and the TV magnate Sidney Bernstein. Architects of every persuasion lent support from the radical Alison and Peter Smithson to the arch-classicist Sir Albert Richardson. Exhibitions at the Arts Council in 1962 and a Whitechapel Gallery show in 1977 celebrating Hawksmoor and the English Baroque received wide publicity. The crisis of Christ Church Spitalfields was the more urgent because of a threat of structural collapse. It led the way, with a handsome restoration of the church and an associated music festival that made the most of its landmark position where the East End meets the City.

Funding St Anne’s through the years

Role of Care for St Anne’s

Our role is to preserve and maintain the heritage of this important building so that it can continue to be enjoyed by future generations.  Read more about our current projects and how you can help